1th November, Thursday is my new kit to the store.
I want to show you a little sneak peek.
This amazing animation made ​​by agata 68

Hello!
I'm looking for some new members for my CT.

Requirements:
- 1-2 LO per kit
- post in at least 3 galleries (including Deviantscrap & DST)
- promote my kits
- be active in the CT team.

please include :
- your name and username
- links to your 2 most complete galleries, blog.

I wanted to make a Halloween freebie for you.
I helped my friends and they have some fantastic QP.
Like my FB page & get exclusive freebie!

A jack-o'-lantern is typically a carved pumpkin.
It is associated chiefly with the holiday of Samhain and Halloween and was named after the phenomenon of strange light flickering over peat bogs, called ignis fatuus or jack-o'-lantern.
A will-o'-the-wisp is a ghostly light seen by travellers at night, especially over bogs, swamps or marshes.
In a jack-o'-lantern, typically the top is cut off, and the inside flesh then scooped out; an image, usually a monstrous face, is carved out, and the lid replaced.
It is typically seen during Halloween.

Jack-o-Lanterns were also a way of protecting your home against the Undead. Superstitious people used them specifically to ward away vampires. They thought this because it was said that the Jack-o-Lantern's light was a way of identifying vampires and, once their identity was known, they would give up their hunt for you.
I hope you'll like the result as much as I do.

and some of the AMAZING pages my friends did for me 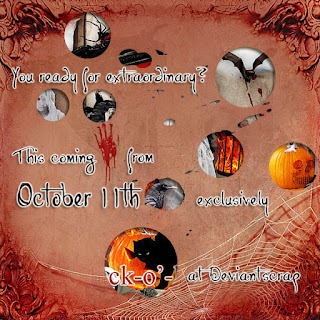